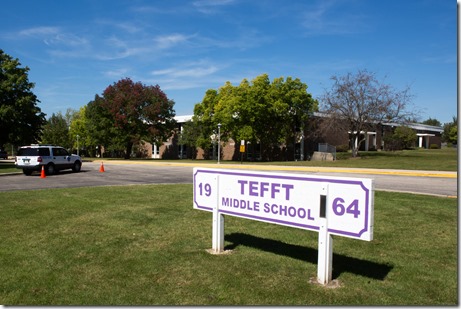 Through a social media grapevine, my wife learned that Tefft Middle School would hold its golden anniversary rededication on September 26, 2015. Would I be interested in an overnight road trip to Streamwood, Illinois, to explore its hallways? Before I could reply, she started recounting a series of ready memories from her years in seventh, eighth, and ninth grade years in vivid detail, complete with the first and last names of her classmates and teachers.

All I could remember is that I attended what was then a junior high school. Most of my ready memories were outside the two-story brick structure that faces Illinois Route 19. Most days during the school year I enjoyed the one-mile walk to and from home. During the summer I flew my control-line model airplanes in the pea gravel parking lot that backed into vast farm fields. My search for memories from inside the building were interrupted by my wife, who again asked, “Do you want to go?”

Why couldn’t I recall any inside memories? I suffered no trauma, unless I counted the summer before I started seventh grade, when my feet grew from size 10 to 13 and my overall elevation remained the same. And other than walking to and from school, and flying my model airplanes – and crashing a few of them – in the parking lot, there resided in memory no happy memories either. Where did they go? Maybe a visit would resurrect some of the. “Sure, let’s go,” I said.

The school’s front doors lead into the cafeteria and common area, and it was teaming with five decades of former students. My wife immediately spotted several she knew. As she turned to catch up with them, I said I catch up with her later. The building wasn’t that big, with parallel hallways on its first and second levels, so I started upstairs, home to the classrooms and the library. Making a complete circuit, including all the connecting cross hallways sparked not one flicker of memory.

Certainly my elementary school friends were my classmates. But junior high memories of Gary Keller, Tom Duddy, Scott Fitzwater, Tom Holtz, Marjorie Schmidt, and Bruce Dahm and Lorraine Trudy (who were a couple from their first meeting in Miss Heilman’s sixth-grade classroom at Woodland Heights Elementary through their graduation from Larkin High School), were unsummonable ghosts. Only Mike Jenkins, a gifted trombonist, appeared in the mental mist.

Walking down the stairs at the east end, I remembered that the cross hallway led to the band room. At that intersection, outside the woodshop, I met Dean Curtis, who I did not recognize. Flummoxed, I realized that he was a junior high classmate. In memory, our first meeting will forever be in Meredith Machin’s sixth period English class during our junior year at Larkin High. His memories were clearly more durable and refined, because he was headed to his old locker in the upstairs hallway. At hearing this, it occurred to me that everyday I go for my swim at the Y, I use the American combination lock I got in gym class at the start of seventh grade.

Sticking my head in the band room’s open door, folding chairs lined the descending tiers in wavering semicircles. Before each of them was a music stand, its design and matte black wrinkle finish unchanged for a half century. Nowhere on the top tier did I see a white fiberglass Sousaphone like the one I played. Nor was there another of brass.

Across the hall was the office of Pat Neuman, the band director, its door and blinds closed. Between my ears I heard the pure, crystalline tones that flowed from his silver trumpet with staccato precision. Now, more than then, I appreciated his patient tutelage as he turned a sixth-grade coronet player into a tuba player. Attracted by its larger mouthpiece and its more soothing bass notes, I’d originally wanted to trade the coronet for a baritone, but the band already had enough; it needed someone to lay a foundation of oom-pa-pa.

Around the corner was the backdoor to the auditorium. Walking onto the stage and looking at the sea of empty seats, I met my mother. The band was performing in conjunction with a school board meeting. What year this was escapes me, so it was sometime between 1965, when I entered the seventh grade, and 1968, when I completed the ninth grade. 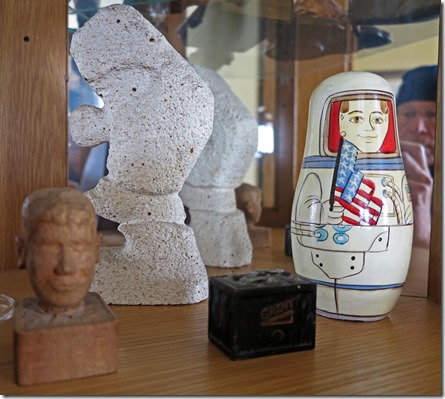 From the time I entered school, my mother organized community support for the bond issues that built Streamwood’s schools, including Tefft. At the meeting, while the band was still on stage, someone on the board said something my mother took exception to, and she stood up from the audience to discuss it with him in her usual direct, straightforward way. Someone sitting next to me on stage, I don’t remember who, asked, “Isn’t that your mom?”

In the opposite hallway, the home ec room was still dedicated to that subject. In it I saw my younger self, a member of the AV club, called out of gym class to change the bulb in a blue Bell & Howell 16-mm projector. Attired in my official School District U-46 t-shirt and shorts, the girls who surrounded me still twitter and giggle.

The art room was one classroom closer to the cafeteria. There, under the guidance of Roger Moore, I carved an Easter Island-like tiki head out of a white firebrick. In our library display case, it towers over my dad’s wood carvings. One is a battery, a model of the ones sold by the family’s Depression-era garage, and the other is me. My dad would take my elementary school friends and me to Johnson’s Mound to play army, and to pass the time, he carved it from a block of wood he found there.

Searching for my wife in the cafeteria, a cooler revived images of brown bag lunches, small cartons of ice cold milk from the Borden Dairy, and the special treat of Suzy Qs and the joy that came from lingually extracting the cream filling from between the oblong chocolate cakes.

Held in the gym, the rededication ceremony introduced a number of teachers, including Robert Kerwin. The name was familiar, and the speaker made the connection. He was my shop teacher, and I think he gave me a good grade for the design and the construction of the bookstand that has, since 1980, held my most often referred to reference books that are always within arm’s reach of my desk.

Playing hide and seek with my past in the hallways at Tefft filled in a few metaphysical black holes, but where – and why – the rest of my junior high memories have secreted themselves eludes me. But in thinking of it now, my memories of high school are not that much more complete.

Freelance writer, editor, and photographer of myriad aviation topics and the exploration of America's small towns.
View all posts by smspangler →
This entry was posted in School, Travel and tagged Illinois, Streamwood, Tefft Middle School. Bookmark the permalink.