Waylaid by Colorful Creatures in Sebastopol 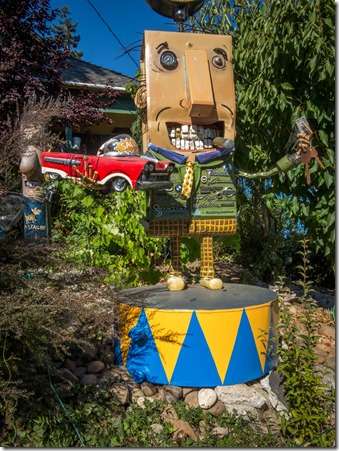 Riding into any American small town always reminds me of home because the landscape is essentially the same. A few newer, larger houses of usually nondescript architecture stand guard on the outskirts of town. As you approach the town center, the homes that line the thoroughfare grow smaller, older, and start to share a tidier structural style. In small towns where a front porch spans a home’s face, when people sitting on them return my wave, the street smiles.

Passing through such small towns there are few reason to stop beyond the need for gas, food, or lodging. It is enough to admire its particular landscape and wonder if its residents see and appreciate their hometown as I do. There are exceptions, of course, like Sebastopol, California.

North of San Francisco Bay, roughly 7,500 people reside in this tidy town surrounded by wine country and equidistant from the Pacific Coast and Santa Rosa. After turning right at the Santa Monica end of Route 66, Ed and I were following the coast roads to Seattle. We over-nighted in Santa Rosa on August 11, 2016, because the reasonably priced Hotel Azura was half-mile walk from the Russian River Brewing Company.

Heading to Bodega Bay the next morning, State Highway 12 led us out of Santa Rosa. In Sebastopol, CA 12 abruptly ended at Main Street. Unsure of our route, instead of continuing westward on Bodega Avenue, we turned right on North Main Street. GPS called out our error and told us to turn left at Florence Avenue and return to Bodega Avenue, which became Bodega Highway at the western city limits.

As we turned onto Florence Avenue, a towering tan square-pants creature with a mailbox nose standing on a blue and yellow circus drum. His right hand held a fire red pedal car in its right hand, waved at us from behind the sidewalk. Slowing to take a long head-turning look, I have the homeowner bonus points for a courageous character of individual expression. When my eyes bounced forward, there stood a bright blue creature in another yard. 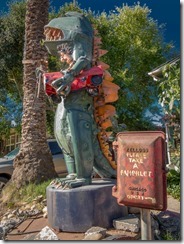 Wandering up and down both sides of Florence Avenue revealed an unmistakable family gathering of welded creatures and creations. What was most maddening was the outdoor absence of a resident who might explain this extraordinary gallery of neighborliness. Crossing the street to meet the creatures who lived there I saw an old fire alarm box, whose nationwide extinction preceded pay phones by a decade or two. “Please Take A Pamphlet,” it urged in white hand-painted letters.

An arrow pointed the way in to an eight-panel booklet that folded down to 4.25-by-5.5-inches. “Patrick Amiot” it read, “Urban Folk Art.” On the back, it said, “Patrick Amiot and Brigitte Laurent live and work in Sebastopol, California. Their junk art and wall reliefs are a collaborative effort of ideas and talents. Jointly conceived; Patrick sculpts and Brigitte paints.” It said nothing of this unique neighborhood gallery.

Amiot’s website showed me more of his work and told me about how he creates it. But it never explained how his sculptural relations came to live in front yards up and down Florence Avenue. I assumed that his studio was the house with the fire alarm box pamphlet holder.

This is as close as his website came to an explanation. Turning to urban folk art for fun, “he created and installed a giant fisherman made from a water heater in his front yard, and received an unexpected reaction—his neighbors want to see more.” 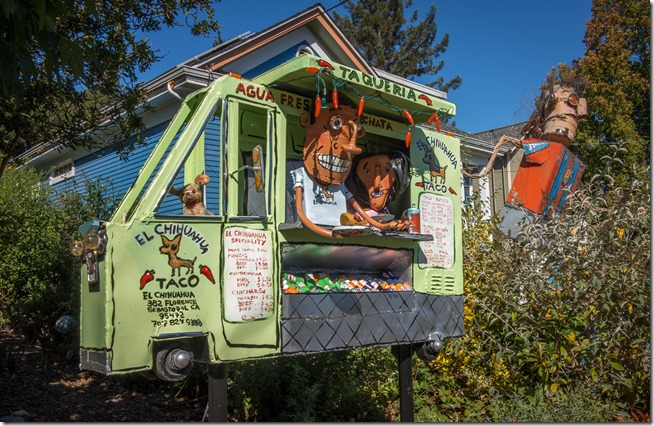 An article in the San Francisco Chronicle, “There’s Art on Our Lawn,” provided a few more details. The other members of the sculptural family are “on loan” to his neighbors. But I wonder, who approached whom about these loans? The reporter interviewed one of them, Jude Kreissman. A teacher, she said of Amiot and Laurent: “We’re great admirers of their work and their life. We love having them as neighbors as much as having the art in our yard.”

In the end, neighborliness is what matters most, which is why knowing the names of the people who live next door, if not all the way down the block, is something else that defines the character of a small town. And in Sebastopol, on Florence Avenue at least, they have opened their hearts—and yards—to creations and creatures that are a joy to meet and behold.

1 Response to Waylaid by Colorful Creatures in Sebastopol