Lessons Learned From a Reintroduction to My Former Self

Winnowing the detritus collected from early in life when its expiration date was an obtuse reality, I discovered keepsakes from what started as a practical adventure. A timeworn plastic frame surrounded the faded 4×5-inch Polaroid image of an almost 21-year-old me. With a thick helmet of dark hair and encased in blue leather with yellow stripes on my extremities, I sit on my Honda CB-750 in the parking lot of the Naval Air Station Alameda photo lab. Next to it is the green macraméd  parachute cord key fob that once held the key to that Honda. Only the dog tag with my name, license plate number, address, and phone number remains. And there is the spiral bound Memo Notes, between whose hot pink covers are the notes from my August 1974 speed run between Alameda, California, and my parents’ home in suburban Chicago, where my trusty Honda, which I named Pegasus, would slumber when I transferred to my next duty station at the dawn of 1975.

Digging deeper I find the manila envelope with the return address for Road Rider Magazine in the left corner and a brown 20-cent stamp of George C. Marshall, Statesman, Soldier in the other. Inside is the story of my adventure, “The Dream, or Facing the Flood,” the first I’d ever written for submission. And with it is my first rejection, dated “11/18.” Reading it, what comes to mind are not the rememberies of emotions inspired by its original reading but the realization of its unrecognized contribution to my professional editorial pursuits.

In four short paragraphs, Road Rider Editor Bob Carpenter, thanked me for the submission and explained that, while he enjoyed the story, he had to return it for several reasons, primarily because it lacked photographs. In closing, he wrote: “So – in spite of the fact that I personally feel the ‘blue leather sponge’ image is one of the great word pictures of all time –I am forced to return your work. Believe me, this time around it’s with great reluctance.”

Rereading the five-page story for the first time since I don’t remember when, and cringing with almost every paragraph, he was being kind. (On the back of the manila envelope, on some unremembered later date, my handwriting lists the story’s deficiencies: punctuation; sentence structure; better definition of idea; stress good points; and better lead-in.” Today, that list would be longer.) But he closed his rejection by encouraging me to keep writing and singled out my “great sense of humor, and even more important, the ability to transmit it. Or, as your dream-hero Bronson put it: ‘Hang in there.’”

His thoughtful rejection of my first work was the structure I unconsciously employed with every note I wrote to every writer who unsuccessfully submitted their work to the magazines I’ve had the good fortune to edit. It was, I realize now, my first lesson in journalism, and for it, Bob, I cannot thank you enough. I never did submit another story to Road Rider or any other magazine because aboard ship, there was no surplus writing time beyond my daily duties at the USS Blue Ridge’s public affairs assistant. And cruising the Western Pacific didn’t leave a lot of time for cross-country trips, so it wasn’t until 2004 that I was able to resume my two-wheeled travels on the BMW I named Blue.

Rereading the words printed  on 15 pages of the hot pink Memo Notes with a Navy-issue black Skilcraft ballpoint was a reintroduction to my former self. While my skills of observation and note taking have improved over the past 42 years, I’m still anally pedantic when it comes to recording each days mileage and expenses. The only difference now is that I use a spreadsheet (because it is better at arithmetic than I am). 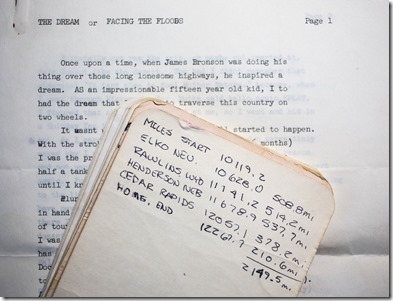 On each page I shake my head, especially at the gas prices as I followed Interstate 80 East: 3.2 gal $1.85 in Elko, Nevada; 3.2 gal $1.77 in Grand Island, Nebraska (where the Holiday Inn, with eight cars in the parking lot, was “full” and didn’t have a room for a rain-soaked motorcycle rider in blue leathers); and 2.6 gal $1.54 in Morrison, Illinois, my last fill up before reaching my destination. If you do the math (or let the spreadsheet do it), it averaged out around 60 cents a gallon.

The overnight rates at motels are another long lost memory. Elko Holiday Inn $15; I didn’t log the rate at Rawlings Purple Sage Lodge; my notes were more focused on the loss of one of the clips that held the master link of Pegasus’ chain in place. That was when I promised myself that my next bike would be a shaft-driven BMW. Henderson, Nebraska, Best Western $15. At Cedar Rapids I stayed with a friend just out of the Navy.

Reading what my former self paid for meals on this adventure frustrated me at every turn. I recorded what are now unbelievable sums for each breakfast, lunch, and dinner, figures that sometimes approached $3. A not once did it occur to me to make a note of what I was eating. Not once! And the only remembery I can excavate is that while I was rain-soaked for most of the trip, I was never hungry.

What challenges my comprehension  most is that this inaugural adventure took place 42 years ago. But such is the nature of time’s passage. More interesting is the opportunity to repeat the trip on its 50th anniversary. That may be the most beneficial reward of my inadvertent discovery and reintroduction to my former self, the creation of another adventure. What makes me giddy with anticipation is the unique opportunity to compare it through the lens of time.

Freelance writer, editor, and photographer of myriad aviation topics and the exploration of America's small towns.
View all posts by smspangler →
This entry was posted in Motorcycle, Travel and tagged 1974 Motorcycle Trip, Interstate 80, Road Rider Magazine Rejection. Bookmark the permalink.