Snuggled up indoors, the polar vortex condensed home humidity into narrow frozen frames at the bottom corners of our new double-pane windows. Watching sunset’s pastel colors play across a crystalline canvas stirred warm weather memories. No matter the season or location, the low-angle light of the golden hour saturates the scene with emotion. This religious light illuminates documentaries and welcome videos at national park visitor centers. 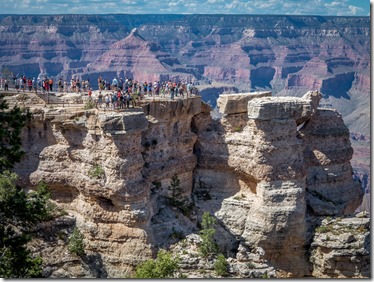 These presentations take visitors to places antipodal to what’s outside the theater. The unpopulated wilderness, whose only sights and sounds are majestic trees or mountains, chirping birds, and scampering four-legged critters, exists only on the screen. At many parks—Yellowstone and the Grand Canyon come to mind—the theater is in a vast visitors strip mall. Trinket-filled shops border a corridor filled with people struggling like spawning salmon.

Time doesn’t transfer from the saturated solitude recorded during that golden hour at sunrise and sunset. Most of us visit the parks in the harsh vertical light of midday. So a sea of faces, their backs turned to the steam geyser or river-carved canyon, obscures your view. A squadron of reconnaissance butterflies flitter above them, selfie-sticked phones that see little more than other faces doing the same thing.

Yellowstone National Park introduced me to this religious light disconnect in 2013, and it tempered my anticipation of our Grand Canyon stop as Ed and I two-wheeled Route 66 in 2016. I expected the crowds, but the strip malls that stood like stark movie sets along the road that led to the park surprised me. All the nationwide name brands stood shoulder to shoulder.

After a long, slow walk in the line of traffic, I got a surprise at the tollbooth. Unhelmeting my sweaty head, the ranger asked for $25, “unless you’re 62…” Interrupting her with the required age, she said, “Let me rephrase that, it will be $10.” Handing me a clipboard, she said I should sign the plastic wallet card with the fine-point Sharpie after completing the form under it.

While I was writing and signing, she explained that the National Parks and Federal Recreational Lands Pass is a get-in-free card good for however many years remain for U.S. citizens and legal residents who are 62 or older. That includes the occupants of a “single noncommercial vehicle OR one motorcycle.” Ed had to pay $25. The ranger said he could return in five weeks, when he turned 62. 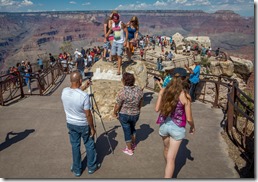 The Journey of Wonder basked in religious light. Leaving the darkened room, the wonder that embraced me was not the “young canyon’s exposure of rock half as old at the Earth, about 4 billion years,” but the diversity of visitors. During the short walk to the Mather Point lookout, I heard Spanish, Italian, French, German, Portuguese, Chinese, Japanese, and a few others I couldn’t put an ear on.

Heading out of the park late in the day, after a long hike across vast parking lots, we passed a long line of cars heading into the park. Hot, tired, and thirsty, we didn’t turn around. The motel clerk confirmed our assumption that the canyon overlooks were doubly dense packed with people seeking spectral emotion they’d seen in the welcome center film. 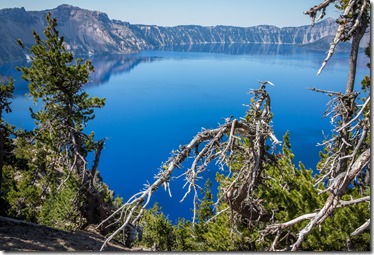 There are exceptions to the strip mall welcome centers. Isle Royale National Park has tidy rustic facilities at each end of the park that are not typically crowded. But it is an island in Lake Superior 6 hours north-northwest of Houghton, Michigan. Crater Lake National Park is another. Ed and I visited after turning north at the end of Route 66. It became my favorite mainland park, and not only because my new parks pass got me in free.

Crater Lake is more private, more personal. Working our way up a twisty turny two-lane road, we stopped at Annie’s Falls, a turnout before the visitors center. A man wearing a Great Lakes sweatshirt, “No Salt, No Sharks,” walked up, nodded at my bike, and said I was a long way from home. From Grand Rapids, Michigan, Bernie rode a Triumph Trophy, but his wife, Bonnie, didn’t do motorcycles, so they were four-wheeling to see their son in Portland, Oregon. 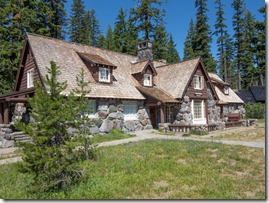 We met them again at Crater Lake’s visitor center, a tidy rustic structure with just an alcove of trinkets. Out front, an older female ranger was giving the oath to a young girl who’d just finished the junior ranger program. Inside, the 22-minute movie, filmed with its fair share of religious light, indirectly explained why Crater Lake would never become a Grand Canyon.

The lake’s watershed is a unique, introverted environment. With no streams flowing in or out of it, its 5 trillion gallons of the world’s purest water comes from snowmelt alone. In 1997, the park lowered a Secchi Disk into the 1,943-foot abyss; it disappeared at 143 feet. Sunlight feeds moss that grows between 100 and 400 feet. The park gets, on average, 44 feet of snow every winter, and we saw patches of it during our August circumnavigation of the cone.

Instead of following signs that move herds along concrete causeways, Ed and I wheeled our way along two-lane road with lovely twists and turns. We reached most of the viewpoints with short hikes from small parking areas. At the crater’s rim, even at midday, the views came closer to the video vistas than at any other mainland park. The small handfuls of visitors at each overlook took photos of the lake, not themselves.

At the Phantom Ship overlook, I met a grandmother who was following her son and his family in her car, and she offered me a cookie. Joining us, the son recommended the molasses cookie, “It’s to die for!” He was right. I got one for Ed as well. The cookies were, like the family, normal sized. Grandma said her son was 6-foot-10. His wife looked to be 6-foot or better, and their kids, a boy and girl in their teens, looked like they would soon top their parents.

When I returned home, the September National G told a depressing tale of the commercial threats facing one of our stops in “Grand Canyon for Sale.” Congress made Crater Lake a national park in 1902. This protected topography, home to some of the last old growth trees in the Pacific Northwest, seems safe from development, but one should never underestimate the ingenuity driven by avarice of developers—and their investors.