Ducking through the doorway hidden behind a faux bookshelf, a nod to a prohibition speakeasy, the tour at the Buffalo Trace Distillery stepped into the dim light of a three-story warehouse. It was filled with recumbent white oak virgins with charred souls. The air was cooler, ethereal, lightly scented with the evaporative vapors of fermented and distilled corn, rye, and barley that escaped their charred oak cells by osmosis. Eyes closed, through my nose I inhaled a long, deep, slow lungsful of this heavenly atmosphere, savoring every molecule. This olfactory delight, said Art to the tour clustered around him, was the angel’s share.

Each barrel is filled with 53 gallons of bourbon; what remains after years of aging depends on what floor the barrels rest undisturbed, and for how long. The barrels beside us would slumber here for 10 years or more. In the cool air the bourbon does not cycle through the seasons of evaporation and condensation, which is more pronounced on the warmer floors above. As a result, the spirits maturing in these barrels are smoother on the palate. But the angel’s share increases with time. When they open a barrel after 23 years to bottle Pappy Van Winkle, little more than 5 gallons remain. “And if you wonder about the economics of old whiskey,” said Art, “understand that the state and feds tax each barrel annually.”

Barrels on the second floor mature for up to nine years. The seasonal temperature changes are more pronounced, and the angel’s evaporative inhalations will consume roughly half a barrel in that time. What remains is more robust, Art said, naming the distillery’s flagship brand, Buffalo Trace. Barrels on the top floor, the warehouse’s hottest, age for four years and give the angels just 25 percent of their contents. The bottles from these barrels usually occupy the bottom shelves of liquor stores, he said.

Unlike Jim Beam or Woodford Reserve, Buffalo Trace is not a one-brand distillery. It distills 18 different brands using just three different mash bills. The first two employ different quantities of corn, rye, and barley, with one having more rye than the other. The third replaces rye with wheat, which gives the spirit a softer touch on the tongue. (Maker’s Mark is the best known wheat bourbon, Art said.) What ultimately determines the bottled brand is the length and location of their warehouse maturation.

Blanton’s Single Barrel is Buffalo Trace’s premium brand. It is bottled by hand, and on each label the staff handwrites the barrel number and date. Each distinctively shaped vessel is topped by one of eight stoppers that “depict the stages of a horse race we have here every year, from standing gate to winner’s circle,” said Art displaying a barrel stave with all eight in sequence. “If you look closely, you’ll see a small letter on each one that in order, spells out the brand.

Named for a previous owner, Blanton’s is aged in the only metal warehouse, built in 1934, after Prohibition. It’s warmer than the red brick warehouses, so the whiskey ages faster. The distillery introduced Blanton’s in 1984, liked the resulting flavor, and dedicated the metal warehouse to it, Art explained. Expanding on the environment’s role, Art said that several years ago a storm deroofed one of the brick warehouses, exposing the barrels to the elements for about 18 months. “Not a drop was harmed during this time,” said Art, and the whiskey exposed to the elements was some of the best the distillery has ever produced. The master distiller, Harlen Wheatley, has been trying to reproduce it ever since.

Having incorrectly read or remembered the time of the tour’s commencement on the website, my wife and I had an hour to wander among the 100 buildings situated on Buffalo Trace’s 125 acre campus outside Frankfort, Kentucky. Most of them are on the National Historic Register; 12 are warehouses, home to 400,000 barrels of whiskey. One of them is the world’s smallest bonded whiskey warehouse. It confines the charred soul of one oak virgin. Built in 1952 for the 2 millionth barrel distilled since the end or prohibition, its current resident is the 6 millionth barrel. It will be replaced by the 7 millionth in about six months, said Art. To catch up with the demand, Buffalo Trace has acquired 280 acres on top of the adjacent hill, “and the game plan is to build a new warehouse every seven months for the next 10 years.”

More than 50 people jockeyed for position, waiting for the visitor center to open its door for the day’s first Trace Tour, Sunday’s only exploration of the distillery. Eavesdropping, many families, couples, and bourbon buddies were whiskey aficionados and strangers bonded through shared evaluations of the other distilleries they’d visited in the Louisville area. Their respective admission fees were all $10 or more. By this metric, the Buffalo Trace tour started high on their list even before the door opened. Like the Trace Tour, all of Buffalo Trace’s tours given during the week are complimentary, and each of them concludes with two half-ounce tastings of select distillations.

Monday through Saturday the Hard Hat tour follows the birth of bourbon from grain delivery and mashing to fermentation, and distillation in one of two 93,000-gallon stills. Monday through Friday the National Historic Landmark tour explores the one of the rare distilleries in continuous operation before, during, and after Prohibition. (It was one of four authorized to distill medicinal whiskey, which required a doctor’s prescription.) The Bourbon Barrel tour requires a reservation; it explores every aspect of cooperage from staves to the interaction between oak, alcohol, and atmosphere.

After dividing the milling crowd into two more manageable groups, Art began the Trace Tour with a brief history of the fermentation and distillation of cereal grains. When the Scots-Irish brought these skills to America, the replaced barley with rye, which was better suited to the soil of their new homeland. Before the revolution, rum, distilled from sugar cane grown in Britain’s Caribbean colonies, was more popular. With a sly smile, Art said, rum was hard to come by during the Revolutionary War, and rye whiskey became more popular with Americans.

When the bills came due after the war of independence, Alexander Hamilton took a page from his Caribbean colony birthplace and, like the British, imposed a tax on spirits. This didn’t go over well with the Scots-Irish, who stereotypically have a problem with authority, said Art, and a nation that had just finished fighting a war fought in large part over taxation. This led to the Whiskey Rebellion. To evade the too-high tax, many distillers moved west of the Appalachian Mountains, where corn was easier to grow than rye.

Working with the available ingredients, the distillers cooked a mash of corn, with a smaller measure of rye. They added some barley, which aided the fermentation that followed the addition of yeast, and distilled a new spirit. In its raw form, it’s moonshine. With no market for it east of the Appalachians, they sent oak barrels of it down the Kentucky, Ohio, and Mississippi rivers to New Orleans. By flatboat, the trip took a year. When no one answered Art’s question, How did bourbon get its name?, he explained. Where we now stood was once the western reaches of Virginia. To honor its Revolutionary ally, the stated named its sunset counties for those in France. The county of the whiskey’s birth—Bourbon—was stamped on each barrel above the stamp denoting its contents.

In the video that preceded our warehouse inhalation of the angel’s share, we learned that the Buffalo Trace Distillery dates to 1792. That’s when Commodore Richard Taylor built a stone house at a spot where buffalo crossed the Kentucky River, which still provides the distillery’s water, on their way to the Great Plains. He added a three-story stone warehouse for goods, including whiskey, in 1811. In 1858 Daniel Swiegert built a small, up-to-date distillery next door. 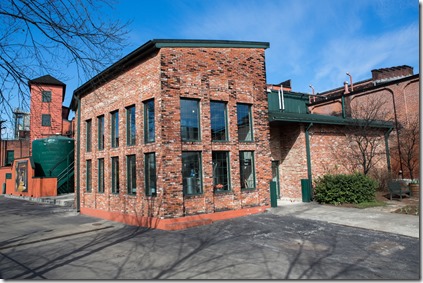 Col. Edmund Haynes Taylor bought the distillery in 1870. Believing that wood warmed copper stills produced the best whiskey, he renamed it OFC, for Old Fire Copper. Taylor built a new distillery on the site in 1872, and then sold it to George T. Stagg in 1878, who renamed it for himself in 1904. In 1881, Stagg built Warehouses A and B, both still in use, as is the steam heating system he added in 1886. Schenley Distillers Corp. bought Stagg in 1929 and began massive expansion program after Prohibition. The Sazerac Company bought the distillery in 1992. The family-owned business completed its renovations in 1999 and rechristened it the Buffalo Trace Distillery, which is how the buffalo crossing at the Kentucky River was originally known.

From the tasting options at the tour’s conclusion I chose Buffalo Trace and Eagle Rare bourbon. Hardy and complex, the former pleased my taste buds more than the latter, They were so happy I bought a big bottle in the gift shop, and I should have gotten another. And I almost got a box of Bourbon Balls, but I could feel the one just consumed during the tasting working on my waistline, so I passed on these yummy chocolate morsels. Maybe next time, when I return for the Hard Hat and Bourbon Barrel tours.

Freelance writer, editor, and photographer of myriad aviation topics and the exploration of America's small towns.
View all posts by smspangler →
This entry was posted in Distillery, National Historic Register, Travel and tagged Buffalo Trace Distillery, Kentucky. Bookmark the permalink.