Of the five fundamental interrogatives, Why is the most important—and the most vexing. Who and What and When and Where are, for the most part, objectively straightforward. But Why, Why is subjective, one person’s perspective on the reasons or rationalizations that led to the activity in question. “Because” and “I don’t know” are not acceptable answers; ask any parent.

The response to Why plots a course to a decision and the consequences—good or bad—that attend it. Its granular thoroughness conveys importance to the respondent and its potential for pleasure and/or disappointment. When planning a journey, it is a critical question, and the answer can provide unexpected revelations and insights.

On June 26, 2017, I depart on Shunpike Canada, a west-to-east transect of the world’s second largest national landmass. With my friend and two-wheeling comrade Ed, we’ll follow the TransCanada Highway from Abbottsford to Ottawa, through Glacier and Banff National Parks (As part of Canada 150, the sesquicentennial of its confederation, park admission is free) and across the north shore of Lake Superior.

Inspired over the decades by stories in a variety of periodicals, and to feed my relentless hunger for new nouns, I want to see them for myself. But this is only the foundation on which my journey is built. It is paved by the TransCanada Highway itself. Like the US Highways system, which was organized in the 1920s, the TCH, proposed in the 1950s and completed in the 1960s, is an amalgamation of existing roads, not new construction.

Unlike the limited access web of the American Interstate system, which started bypassing small towns during the TCH’s gestation, my research reveals that two-lane roads that pass through towns and villages still predominate on the TCH. Most of the “twinning,” doubling their width to four lanes, is ongoing around the route’s larger cities. 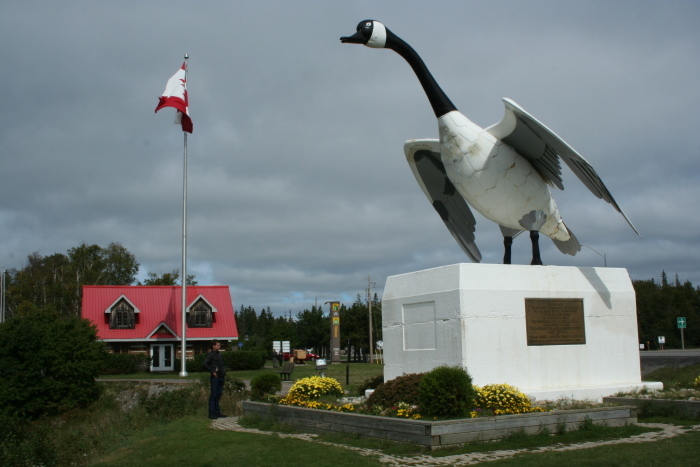 Passing through Canada’s towns and villages is important because serendiculous sights and encounters demand further examination. Each of them is potentially rich with opportunities to overcome our virtual social media isolation with literal face-to-face interactions. It is an excellent way to meet and get to know our long-time neighbor, another reason for this journey. (Do you know the names of your next door neighbors? How about their last name? And when was the last time you talked with them?)

Having visited this northern nation several times over the past 30 years, traveling there is not completely unknown. But anticipating two totally immersive weeks in a countryside and culture burns with an ember of anxiety that is both frightening and exciting. One must never forget that this is a separate nation.

Preparation is the antidote for anxiety. Conversations with my insurance agent, bank, and credit card and cell phone providers have illuminated the dark corners and revealed nothing scary. Passport in hand, crossing the border on my way north should not pose a problem. I know how many cigars I can bring with me and I’ve never had or been charged with a DUI, an offense that will deny admission.

During my journey I plan to enjoy my first Cuban cigar, because are legally sold in Canada. I’m curious to know if they are really that good or their reputation is built on America’s prohibition of them. Perhaps not without reason, given America’s political climate, I’m more concerned about turning south for home. Regardless of which way a traveler is headed, crossing the border is at the discretion of the personnel at each checkpoint.

Uniting the reasons why I’m eagerly anticipating this journey is a 2008 Canadian film, One Week. Its protagonist, Ben Tyler, is a high school teacher of English whose first novel was rejected. In the film’s opening sequence a doctor delivers a diagnosis of some quickly growing nth-stage cancer with a 10-percent chance of survival. At several points he asks, “If you had one week to live, how would you spend it?”

Instead of immediately pursuing treatment he postpones his impending wedding, buys a motorcycle, a Norton Commando, and sets out on a journey from Toronto to Tofino, an island that is the western terminus of the TransCanada Highway. His goal? To make memories that give what’s left of his life value beyond its prosaic routine.

The immense and diverse landscape is an important, albeit tacit, character in the film, and I can’t wait to meet it. Except for Tofino; reaching it entails a 2-hour ferry ride, and the wedding of Ed’s daughter in Massachusetts is behind our unmissable arrival deadline. But that, too, is an opportunity for Shunpike Tofino to explore that part of North America.

Standing at the doorstep of my dotage, the roster of my friends and acquaintances enduring medical maladies that require bypasses and replacements grows almost daily. Surely, one day, my name will make that list. Until then, continuing my quest for new nouns—persons, places, and things—is the best investment of the time that remains before my expiration date. In that regard, maybe I am like Ben Tyler.

Freelance writer, editor, and photographer of myriad aviation topics and the exploration of America's small towns.
View all posts by smspangler →
This entry was posted in Uncategorized and tagged Shunpike, Trans-Canada Highway, Why Travel. Bookmark the permalink.