Sometimes a single word is all it takes to focus a fuzzy philosophy and make its underlying principles logically clear. Finding that word is the challenge. Some search for it their entire lives. I found mine on my way to confirming the spelling and meaning of another word I cannot now remember. May I introduce you to: Shun*pike n. a secondary road used to avoid turnpikes and expressways – shun’pik’er n. shun’pik’ing n.

Avoiding the traffic, tolls, texting drivers that crowd turnpikes, expressways, and Interstates is one benefit of shunpiking. Another is that secondary roads, state and county roads (many of them former U.S. Highways superseded by four-lane replacements) are the two-lane connections that unite small towns like a string of pearls.

But following a shunpiker’s path doesn’t lead to rewarding serendiculous surprises without the proper mindset. Most important is being open to collaborative whimsy that leads to the creation of words such as “serendiculous.” It was born in a postprandial search for the words that succinctly summarized that day’s rewarding and unexpected Route 66 revelations and interactions.

Perhaps the Tullamore Dew my riding buddy Ed and I were sipping as we sat outside our motel room helped us fuse these two words into one:

For our purposes, the definition of the root word, especially its archaic use, best serves the intent of our conjoined word: Ridi*cule n. [Fr ridiculum, a jest, laughable (thing), neut. Of ridiculus, laughable, comical] 1 a) the act of making someone or something the object of scornful laughter by joking, mocking, etc; derision b) words or actions intended to provide such laughter 2 (Archaic) a) an absurdity b) foolishness.

Contemplating our many serendiculous encounters on my solo trip east from the Pacific Northwest, what united their diversity is that we became more receptive to them by shunning quotidian decision making. During this thousand-mile think four catalysts for serendiculousity took shape, and exercising them returned immediate results.

When in Doubt, Top the Tank

There are physical and emotional aspects to this one. Riding out of Bend, Oregon, a small blue sign that said “Next Gas 99 Miles” reinforced the former. Naturally, this sign was stuck alongside the road about 10 miles past Bend’s last fuel stop on this road. (This must be a requirement of the association of sadistic sign planters.) My mistake was not turning around and topping the tank. Instead of enjoying the scenery and looking for interesting turnoff to explore, I obsessed on the fuel gauge and was blind to the passing landscape.

Two days later, passing eastbound through Shoshoni, Wyoming, on US 26, I thought about getting gas and decided that I had more than a hundred miles left in the tank and more than a few fuel stops in that distance. But it had been a long, quiet morning on the road, and I needed to fill my emotional tank by talking to someone, even if it was the clerk at a gas station, so I U-turned for the gas station.

As I was cleaning the bugs off my visor, two Harleys rumbled up to the other side of the pump. We nodded a greeting to each other, as those related by two wheels often do, and then I started a conversation. As a card-carrying introvert, this is something I seldom do, but I’ve been taking lessons from extroverted Ed, because observers rarely participate in serendiculous adventures.

Aside from the tattoos and leather, we were peers beyond two wheels. Bear lived in Minnesota, and “I had long hair,” he said, showing its length with a hand held in the small of his back. Discharged from the Navy in 1977 (a year before I got out), “I promised myself that I’d be a hippy ‘til I’m 50,” and on that birthday he started shaving his head.

Mark was from Montana. He met Bear in the engineering department of a submarine tender. After getting out of the Navy in 1978, he and Bear reunited for a road trip to a friend’s wedding. They had so much fun they vowed to do it again every year, and 35 years later, they actually made it happen.

Our meeting in Shoshoni was their third trip, and unlike and I, who make solo rides east and west, Bear and Mark meet somewhere in the middle then decide where to wander. The more extroverted of the pair, Bear said, “I have nine days and a credit card that says I can go wherever the hell I want.” 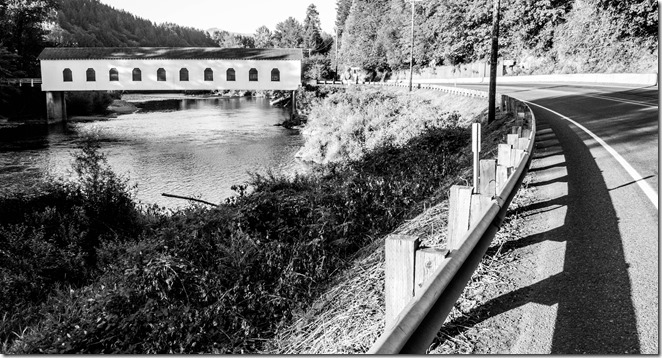 For the Big Picture, Look at a Paper Map

Zumo excels at GPS navigation and suggesting where to refuel and rest for the night, but when following a shunpiker’s path, it can ask more questions than it answers. There’s never been a question that Zumo will not lead me to my desired destination. But there are questions of the algorithmic routes that will get me there. To avoid this distraction, I rely on the cartographers who craft old school paper maps, which I collect from every state I visit.

Maybe one of these days digital maps will incorporate the dotted lines that indicate that the road they parallel is a scenic byway. It would make planning a route for Zumo on my laptop easier, but it still wouldn’t be as much fun as discovering all of the serendiculous opportunities scattered along the way.

That’s how I found the Old McKenzie Road, which took me past the Goodpasture Bridge (above), and the McKenzie Pass-Santiam Pass Scenic Byway, which snakes for 82 miles through the Cascade Mountains in Central, Oregon. It took me almost four hours to cover this distance, most of it in second and third gear. Yeah, it’s a biker’s twisty dream; there are sections where 30-footers are prohibited. If you’re heading east in late summer, don’t leave early because the rising sun makes it hard to see. Fortunately, there wasn’t much oncoming traffic on the excellent road.

Had I not followed the dotted lines on the paper map I would have missed a first-hand geography lesson at the Dee Wright Observatory (which I’ll share in a dedicated story) that introduced me to the Three Sisters. 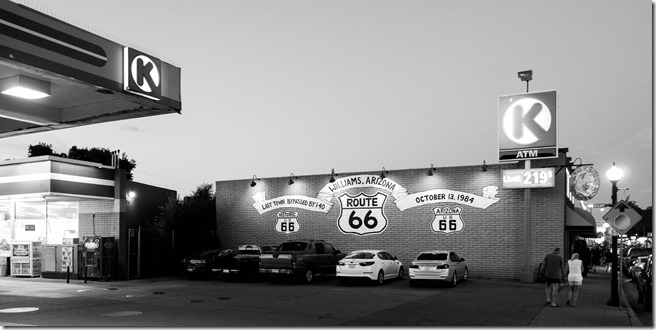 With so many small towns to visit, and with so little time left in life, it became clear as Ed and I recollected out penultimate adventure that we’d spent too many days in the saddle. As we discussed our overnight stops with friends in his backyard redoubt overlooking the lake, we concluded that limiting our daily travel to 300 miles didn’t always leave us enough time to explore. Some places deserved a second night so we’d have a full day to poke around in search of serendiculous encounters. (A day of butt rest would be nice, too!)

Williams, Arizona, would have been an excellent candidate for an extra day. My stroll up and down the main drag after dinner inflamed my curiosity, and the late hour (and the need to visit the Laundromat) didn’t allow time to satisfy it. On October 13, 1984, it became the last Route 66 city bypassed by Interstate 40.

Take a Hint, Act on Impulse

Another town worth a day of exploration is Gualala, California, and finding it was a defining moment of serendiculousness. We were riding up the coast from San Francisco, enjoying the ocean view. And with some regularity we passed signs that pointed to a “Scenic Overlook” that required a perpendicular turn to the left or right. After passing a dozen or so such signs, I finally took the hint and suggested that we turn off at the next opportunity. The photo above does not do the vista justice. If you look close, you’ll see kayakers on the Gualala River. If we spent the day, I could have joined them.

All of these are lessons learned that will forever influence my shunpike journeys. More than rules, they are guidelines that all say the same thing, to listen to that little voice between my ears when it whispers, “Hey, that looks interesting!”