Route 66: There Will be Serendiculous Wrong Turns 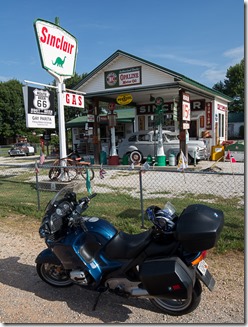 With a multitude of cutoff towns and rerouted roads, there is not one true path for Route 66. You pick an era and hope for the best. For the most part, Ed and I have been following the 1926-30 route because that has taken us to the most interesting places. But some of the things we’d hoped to see were on 66’s route in other eras. Those paths and turns are not so well marked, so there will be wrong turns on any 66 adventure. But that’s not something to mourn with a U-turn because something just as interesting may be around the next corner. It happened with such reliability today, we united serendipity and ridiculous into a unnatural union whose offspring is that strange looking word in the headline. 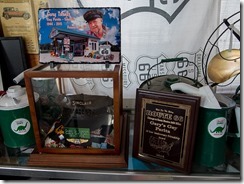 It started when we met George Turner, a retired Marine who runs the Gary’s Gar Parita Sinclair Station on Old 66 in Ash Grove, Missouri, with his wife, Barb Turner Barnes. Her dad, Gary Turner, ran the station from 1944 to 2015, when he passed away, George said. One thing led to the next, he said, and he and his wife packed up and moved to Missouri from South Carolina. Apparently he’s an automotive collector, because he said half the stuff on display was already there, and he brought the other half with him. In the cluttered office is a memorial to Gary. 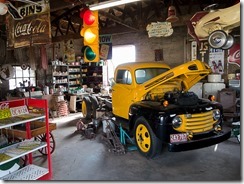 The stone walled garage was amazing, and George is an unappreciated curator of Americana. The yellow Ford truck is perfectly situated in the garage. It is surrounded by uncountable items that you would find in any garage of the era. And George explained every item in detail to a couple of guys who were visiting at the same time. He not only explained what the item was, what it was used for, he could also recount some of the history of the company that made it. The gentlemen he was talking to must have been car guys because they were all geeking out. The only real clue that it was not a working garage was its cleanliness. It was more museum than busted knuckle grease emporium.

What was most clear and ultimately enjoyable was how much George honestly loved what he was doing. He had a practiced but genuine patter that greeted every guest that walked through the gate. He encouraged everyone to wander around and explore the garage, office and grounds, “and if you want, I’ve got a little gift shop over there.” On post by the gas pump was a small unobtrusive box for donations. As we got ready to leave, George gave each of us two post cards, because “We live in a two-fisted world.” He urged us to keep one, and to “Send the other one home, to make folks jealous, so they’ll come visit. The postcard was a black & white photo of the station, with this quote: Folks from all over the world say it’s the dream of their life to travel historic Route 66. It’s the dream of my life to meet those folks. Friends for Life. Thank you!” Given the “Friends for Life” that graced the memorial in the office, I’m guessing that Gary Turner was this saying’s author. But George is carrying it into the future. And as we were leaving, a carload of four Spaniards, two hipster couples complete with beards and ink, pulled up, and I took three of their cameras to capture their visit while they held up a black flag with a white Route 66 logo on it. As we were pulling on our helmets, George said that yesterday a group of 30 bikers from Spain had visited.

Kansas has the shortest stretch of Route 66, just 13 miles. With the temperature climbing into triple digits, we impulsively turned right, away from the pink line on Ed’s GPS, with the idea of stopping to dehelmet and dejacket and dehumidify. That’s how we found the Rainbow Curve Bridge (and met up again with the Spanish hipsters, when they arrived shortly after us.

Located west of Galina, Kansas, the bridge was built over Brush Creek  in 1923 and served Route 66 daily from the route’s birth in 1926 until 1960. The only surviving marsh arch bridge on 66, it was listed on the National Register of Historic Places in 1983. In 1994, as a joint project between the Cherokee  County Commission and the Kansas Historic Route 66 Association restored it, and you can drive across it—one way—today.

Minutes later after crossing the bridge we were in Oklahoma. And we were hungry. Rolling into Vinitia, the temperature on the bank sign read 102, and a big vertical neon sign ahead said EAT. That meant food and, more importantly, ice water and air conditioning.  And, it turned out, a bit big serving of Route 66 history. 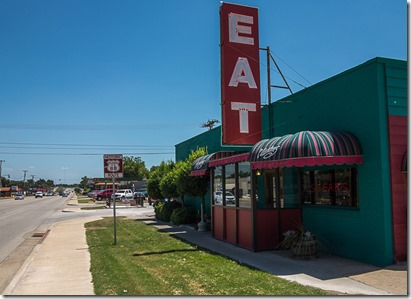 After two big glasses of ice water, and while waiting for our lunch, we read that Clanton’s Café is the oldest family-owned Route 66 restaurant in Oklahoma. It opened at its current location in 1947, and Dennis and Melissa Clanton Patrick are the fourth generation owners. It grew out of the Busy Bee Café that Sweet Tater Clanton opened in 1927. The menu said that it feature hand peeled and cut taters and homemade salad dressings. The pies are made from scratch from recipes little changed since they were developed in 1927. I opted for a club sandwich and more water. Every seat in the house was a booth (and they were proportioned for people with a 1927 stature), and the walls were covered with an eclectic combination of 8-by-10-inch store-bought picture frames that held images of notable Oklahomans. I didn’t recognize any of them.

With the temperature climbing higher, we took I-44 past Tulsa and are now sucking up the air conditioning at a Super 8 in Sapulpa, Oklahoma. Tulsa is as far as I’ve ever traveled on the Spangler’s 1965 adventure on Route 66. From here to LA, it’ll all be new, and were depending on serendiculous decisions to surprise on at least once a day.