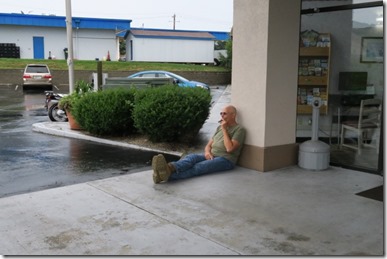 Morning dawned gray and wet in Pacific, Missouri. Waiting it out seemed the best option because riding in the moist contrails of the semis barreling down the road unabated by the weather, seemed the best course of action. The Quality Inn sign out front flashed the time and the humid temperature of 68 degrees, and the canopy kept me dry, so settled in for a cigar with my coffee. It was the perfect combination to ruminate about this trip.

The point of any trip is to go someplace. This adventure will take Ed and me from Chicago to LA on Route 66 and up the coast to his home in the Seattle area. After I do laundry there, I’ll figure out which way I’m coming home, a connect-the-dot journey with the position changes being the several sources I’m seeing for some stories I’m working on. Watching the truck-smashed raindrops define the vortices of the cars and trucks speeding by, their windshield wipers working furiously, I collected and collated my thoughts and impressions so far, and it struck me that I’ve already traveled much of the forthcoming route. 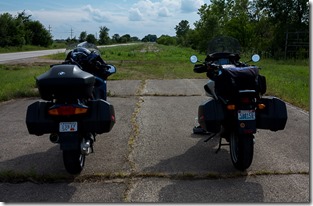 Heading into Chicago on US 41, the sign for a cross street said N. Wolcott Ave. A text-message like ping sounded in my head. I spent the first three years of my life on this street, from my arrival in 1953 until the Spangler family moved to Streamwood in 1956. And nine years later we were in the family’s brand new 1965 blue Buick Special station wagon, with its V-6 and automatic transmission, heading following whatever path Route 66 followed that year to Tulsa, Oklahoma. Heading south, none of the roads looked like the ones we were riding, especially the sections here the old route ran parallel to the even older, abandon stretches of pavement.

We were going to visit Art and Jody Johnson, friends and classmates of my father when the all attended the Chicago Art Institute. It just so happens that we passed the school’s iconic lions when we made the left turn from Indiana to Adams, and saw that there was no way we could get a photo of the bikes with the sign that marked the start of westbound Route 66, unless we wanted to get flattened by an articulated CTA bus, that is.

The innkeeper on duty came out front to check the weather and have a smoke. Talking about our trip she thought us demented. But I sensed a tinge a jealously. Her youngest son, 27, was a truck driver, and he’d just returned from a run to Oregon, and “He had pictures of all sorts of animals he saw along the way.” Her oldest boy was a Marine. He was in California, now, after two tours in Afghanistan, and that was someplace she hoped he would never travel to again, “It’s just awful.”

As she finished her smoke, the rain started to abate, and we saddled up, and continued along the general path of Route 66 that I’d traveled in 1965. There isn’t much I remember about that trip, other than long hours of boredom in the back seat with my sister. To break the monotony for our parents, we fought from time to time, mostly about how hot we were and who was encroaching on the other’s backseat space. 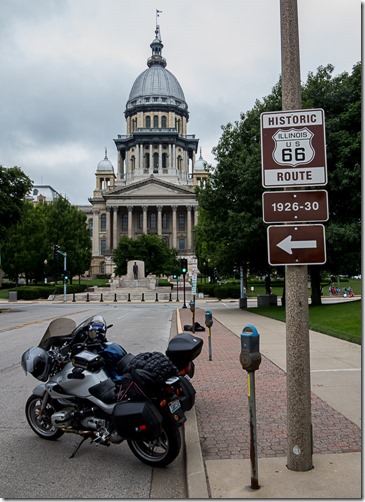 But visual memories surfaced as we rode today, and the day before. In Springfield, Illinois, we stopped at the final resting place of Abraham Lincoln, and a museum, I don’t remember, where, to rub Abe bronze nose for luck. Following the pink line that led us along the 1926-30 path, Ed and I were surprise to see that it took us past the state capital building. Parking spaces allowed us to take a rest and grab some photos, and a state worker cutting the grass took a break and offered to take our photos.

From there we pretty much followed IL 4, but we took the cutoffs to the small towns that were like points on the saw blade that was the original route. To Ed I explained that the US highway system involved some new road construction, but initially it united existing roads with the numbering system that made getting from place to place easier. As is the driving force of progress, people wanted to get to their destinations more quickly, so the highway commissions started excising the smaller towns from the route in the 1930s. That eventually led to the Interstate system and the retirement of US Highway 66.

But as our peregrinations through rural Illinois proved, these roads, now with different names, are still in service. On the east side of Nilewood, population 300, we rode a segment of Old 66 paved in bricks. And on the west side of town, there it was a narrow (maybe 12-feet wide) strip of concrete with grass growing up through the cracks. The brick road was now named Snell, and the concrete path was Gillespie, and they were still important to the people who lived on either side of them. 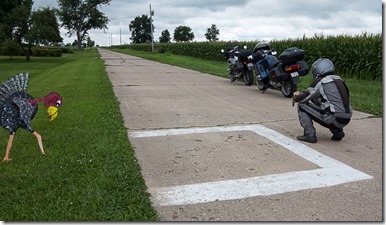 Their homes, like their communities, were well neat and well cared for. On Gillespie road we saw a sign for turkey tracks, where the wild birds had left their footprints in the wet concrete. We parked at the side of the road and spent maybe 20 minutes looking around and taking photos. The grass around the sign was neatly trimmed, and not a single car interrupted our exploration. On our way out, the man cutting his lawn at the house not 50 yards from the turkey tracks looked up and waved. We returned the greeting, but with our full face helmets, he could not see our smiles that mirrored his.

One worry about this 66 adventure was that the attractions along the way would be local attempts at creating a Disney view of the past. But so far, that hasn’t been the case. Rather than presenting an idyllic look at the past, the attractions have been a presentation of honest pride in the contributions of their creators to their communities.

Crossing the Mississippi River on I-55, looking north gave us a good view of the Gateway Arch, and on our 1965 trip, I think we stopped for an up-close look. My dad and I rode the the tiny car to the top, but my mom and sister were content to look up.

In Rolla we spent our first night in the Holiday Inn, which was a big deal. I remember reading that John Glenn was involved with the company in some way, but my parents wouldn’t let me bring my GI Joe and Mercury capsule to play with in the pool, which was filled with sparking, crystal cold water. That water would feel good now! Gauging the temperatures from the sign Ed and I pass, it is in the upper 80s, and the humidity is even higher. The wind chill of our forward speed doesn’t make the any more comfortable.

At the Missouri Route 66 Welcome Center rest stop, the last one in the state, Ed and I faced the same dilemma posed to the highway commissioners that determined 66’s path, getting to our destination in a reasonable amount of time. Three days in, we’d covered just 700 miles. With limited time to travel the remaining 1,900 miles, we’d have to determine our own cutoffs. Seeing little of interest along the rural route of the past, we opted for the paved over path that was I-44. Relying on the guidebooks, we’ll resume our trek on 66’s historic path course on the west side of Springfield, Missouri, as time and Mother Nature allows.