There were few essential documents needed for Shunpike Canada. First was a passport. 9/11 terminated the convenience of crossing the border both ways with just the second required document, a driver’s license, which was the only proof of citizenship needed for my inaugural visit to Canada in 1981. Everything else, from customs at the border, insurance, and paying my way with money denominated with terms, and mobile communication were unknowns seeking anxious enlightenment.

Explaining my journey, my insurance agent said I was covered, that most vehicle insurance travels well north of the border. All I needed was my proof of insurance card. Expecting an injury-free adventure, I didn’t think about my health insurance until I’d returned. Fortunately, my expectations were fulfilled.

Online enlightenment about currency exchange was not clear cut. Many businesses just across the border on both sides accept the other nation’s currency. But this is not a nationwide courtesy north or south. After wading through a lot of conflicting advice, the consensus favored ATM withdrawals over currency exchange at a border bank because it’s more convenient and often has a better exchange rate.

What mattered more were the fees. There’s always a fee. As always, the question is how much? Being persistently frugal (or, depending on your point of view, stubbornly cheap), I requested and read the fine print provided by my bank and credit card companies, VISA and Discover. Because I hate monetary surprises, I included my mobile communicator, Verizon.

The good news is that my iPhone and VISA credit card would work anywhere I went in Canada. To communicate, beyond getting at least one bar of service, I would have to buy an international plan or a $5 TravelPass that drew on my existing talk, text, and data plan. The latter was the more economical option, and I really didn’t have to “buy” it; Verizon added the daily fee to my account every day I used my phone in Canada. Not using my phone wasn’t an option because my wife expected texts reporting my daily OTR (on the road) times and Arrival updates that informed her of our location. Every other day or so I’d call to share the more details.

Canada accepted my MasterCard ATM and VISA universally, so it was no surprise that this convenience came with a fee. In addition to ATM fees for getting Canadian cash, my bank imposed a fee “equal to 3 percent of the amount posted to the account.” VISA did the same thing at 5 percent. I never used my ATM (I traversed Canada cash free; Ed did get some, and it is attractive rectangles of polymer with maple leaves and Braille denoting its denomination).

The VISA fees totaled about $10. Why there’s a fee when a computer is doing all the work is beyond me, but they charge them because no one tells them they can’t. And how do I know there’s no point to these fees? Because Discover doesn’t impose a fee for international use. All it asked, as did VISA, is that I complete an online form to let the company know when and where I was going so my charges would not tickle their “suspicious use” algorithms.

As you might suspect, I used Discover at every opportunity. Unfortunately, not all Canadian businesses accept it. Paying my way across Canada became a game of Discover roulette. Canadians use a portable credit card chip reader—the Veriphone by Micro Systems was the most popular—that came to you, so you never lost sight of your credit card. (I wish U.S. businesses would adopt it, because who knows what your credit card is doing when out of sight.)

Not only does the terminal come to you, it speaks French (I hit the run button early in the trip) and figures your tip for common or a custom percentage. Finally asking about it, the server at the Lake of the Woods (LOW) Brewing Company in Kenora, Ontario, said Canada has been using them for years, and that they got it from Europe. And then he said that it would not accept my Discover card. But it worked with my VISA on the first attempt. 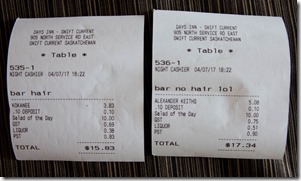 When the bills came due, the statements clearly spelled out what I’d spent in Canadian dollars and what I paid in U.S. dollars and the effective exchange rate when the transaction posted. And this is how I know a computer was doing all the work. Each rate followed the decimal point to nine digits. For dinner at the LOW Brewing Company, it was 0.777905638.

Heading north, customs played a minor role in my dystopic daydreams of doom because I knew what to expect, thanks to a story I did last year. Regardless the reason for visiting or mode of transportation, if the border background check reveals a minor or serious crime that violates Canadian law, “you might be denied admission.” Border agents don’t take your word on it. Through its Canadian equivalent, their computers interface with the U.S. National Crime Information Center, which gives it full access to the FBI Criminal Database.

What gets most people is driving under the influence of drugs or alcohol. It makes no difference, said the Canadian official I interviewed, if the DUI leads to a conviction or probation before judgment. If less than five years have passed since you fulfilled your sentence or probation, your only option is to apply for a $200 temporary residence permit, which allows a year of repeated coming and going. “You can apply at a Canadian consulate, or at the border, but at the border the approval depends on border official,” said my source, and the permit does not work for serious crimes such as manslaughter.

My border crossing plan was to pull up to the agent’s booth, kill the engine, extend the kickstand, remove my gloves, glasses, and helmet, dig out and deliver my passport, and answer all questions concisely. I don’t remember if I shared this with Ed, but I think so.

As lead, Ed went to the first open window. Through our helmet communicators, I heard both sides of his conversation with the agent. His hearing attenuated by helmet and ear plugs, he didn’t hear the agent telling him to shut off the bike, remove helmet, and please present his passport. The agent’s voice grew louder with every reiteration of this request. I was about to repeat it when the agent at the adjacent window motioned me forward.

After she swiped my passport by her computer, she asked: Where was I from? Where was I going? Did I have any alcohol and/or tobacco to declare? And did I know the motorcyclist at the next window?

The Canadian Customs website said the maximums were one bottle of spirits 1.5 liters or smaller and 50 cigars. Reporting a fifth of Tullamore Dew in a stainless steel bottle and 33 cigars, she didn’t ask to see them. Glancing at her computer screen, she returned my passport, said I was good to go, and wished me a safe trip. Rejoining Ed in the parking area, I waited while he put himself back together.

When it comes to the metric system, the United States is the globe’s outlier. I worried about that. Not about buying gas by the liter—a full tank is a full tank—but about obeying (give or take) speed limits in kilometers per hour. Blue’s speedometer has secondary kph markings, but they are hard to see. And to ratchet up my anxiety, I thought maybe the border scrambled the GPS’s electrons because it showed a speed limit of 43 mph at the bottom of Zumo’s screen.

It took me about a half hour to mentally convert 43 mph was 70 kph, the posted speed limit. The light went on when the limit jumped to 68 mph right after I saw the sign that read 110 kph. (More embarrassing, I was halfway across Canada before I figured out that I could use the speedometer’s kph markings to convert the distance to our next fuel stop or meal.) Canada takes its speed limits seriously. Roadside signs noted the fines for specific excesses. In a 100 kph zone they were: 110 kph—$95; 120 kph—$220; and 130 kph—$295. And then there was this sign, all by itself. 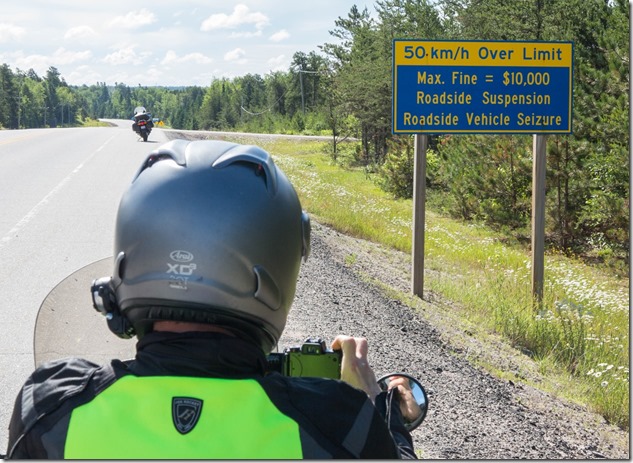 As an older white guy with little hair left, people said I was childishly worrying about getting back into the United States. But I was, because weird stuff happens; someone has to win the lottery, and crossing the border was like buying a ticket.

Fueling my concern was the militarization of almost every law enforcement agency, except maybe the Fish and Wildlife Service, and the increasingly intolerant polarization of our social and political ideology and actions. Some would blame the media, but its reliable sources didn’t equip local, state, and federal law enforcement agencies or author their rules of engagement. Ultimately, how it goes at the border is at the discretion of the agent and the mood and attitude of the interaction’s participants.

Surely, they didn’t plan this, but crossing the St. Lawrence River on the Ogdensburg-Prescott International Bridge atomized my obsessive border fears. I was just happy to make it across alive. The bridge rises to 240 feet above the river, and you can see it all the way across because the roadway is a steel grate. This isn’t a problem for four-wheelers, but on two it is a slow, squirmy, and unstable ride on a very long cheese grater.

The burley, young border patrol agent with a shaved head and spikes of a tribal tattoo peeking out of his dark blue short sleeve on muscular right arm greeted me with a smile. “Hi!” he said, and as I was reaching toward my chin, “You don’t have to remove your helmet.”

He swiped my passport across his computer screen and then asked asked how long I’d been in Canada, if I had anything to declare, and where I was headed. “About two weeks,” I said, explaining that my two-wheeled compatriot at the next booth had started our journey across the Trans Canada Highway at Abbottsford. “The only thing I’m bringing home with me is the gas in my tank, and I’m headed home to Wisconsin.” He then asked if we’d had a good trip—“Excellent!” I said—and he welcomed me home.

Thanking him for his kind words, I wished him a good day, toed Blue into first gear, and moved on, happy that, once again, I didn’t win the lottery. About a quarter mile later I stopped at the bridge’s toll booth: $2.75 US or $3.75 Canadian. Welcome to America.