Posted on February 7, 2017 by smspangler

If you seek the fountain of youth, check out Fort Dodge, Iowa. When I asked about a single room for the night of August 22, 2016, the Comfort Inn clerk immediately offered me the senior-citizen rate. “It’s our best!” she said.

Less than 90 minutes later, after a short walk to dinner and another short stroll to the grocery store for a libation to accompany my postprandial cigar, another young clerk carded me. Perhaps motivated by my confused countenance, she said, “You look young!” And then she scanned that funky black-and-white checkerboard matrix on the back of my driver’s license.

It’s possible that this was store policy for everyone purchasing alcohol. I didn’t wait around for the next suitable customer to confirm this. A bit unnerved at having lost more than 40 years in little more than an hour, and worried about my brown paper bagged Heineken getting warm, with long, determined strides I walked directly to the mirror in my room. There, as I have for about a decade now, I saw the face of my father, when he was in his late 50s, before prostate cancer started to age him.

“So much for the fountain of youth,” I said to my reflection.

Ultimately, this was a relief. The idea of resetting my life to an age worthy of being carded and having to live it over again is more unsettling to me than the reality that, if all goes well, my ultimate expiration date is but a decade or three away. But the experience in Fort Dodge planted a bean of reflection in my brain that has been growing slowly since then, sprouting questions about self-image, how others see me, and how I see myself.

The images coalesced not long ago on a sunny morning when I was walking to the bank and post office. My shadow preceded me, stride for stride. It was an accurate outline, but what filled it was the surface over which it traveled, sidewalk, street, dirt, and grass. It is surely how others see me, in the context of their environment, be it a motel or grocery store.

My outline is the same when I gaze into the mirror to scrape the little hairs off my face, and so is are the details that fill it. Regardless of the effects of time and gravity, I’ve never assigned this reflection a specific age. (Am I the only one who feels ageless, because I’m unsure how I should be, feel, and act as my chronological countdown increases?)

Paddling around this pool of solipsism I quickly realized that how one perceives an outline’s filling applies equally to small towns. Williams, Arizona (population 3,023), immediately came to mind. It was one of my favorite towns on Route 66. What made it special was not the Canyon Club, where Jackie, the boisterous, blonde, and bawdy barkeep in her tank top and jeans, gave Ed and me some sights to see. Nor was it the superb dinner we had at the Station 66 Italian Bistro, with its craft beer and courtyard guitarist singing, “God is great, beer is good, and people are crazy.” It was the Laundromat.

Main Street is the William’s face to the world; from end to end, it is primped and painted and pointed at those seeking a nostalgic glimpse at Route 66. Like us, many people visit after peering into the nearby Grand Canyon.

Washing clothes at 8:17 on Sunday night was sitting on the backside of a two-way mirror that reflected the character of the good people of Williams. Life doesn’t any more real than carting your dirty clothes to the Laundromat. Rather than voyeurs, like everyone else there, Ed and I wanted nothing more than clean clothes.

The overseer, a bearded 40-something guy wearing Army-issued camouflaged pants, said with undertone of congratulations that we’d just made it. A sign explained. Because the facility closed at 10 p.m. on Sunday, its patrons could not fill and fire up a washer after 8:30 p.m.

The place opened at 6 a.m. I know this because at 9 p.m. a young man with a neatly trimmed Vandyke beard, Iberian features, and a Spanish accent popped in to count the available washers. The overseer, who stopped his nonstop cleaning, pointed to the sign, answered the man’s question about opening, and then went back to work. Clearly, the visitor had been celebrating on Main Street. “I’ll be back, if I’m awake.” 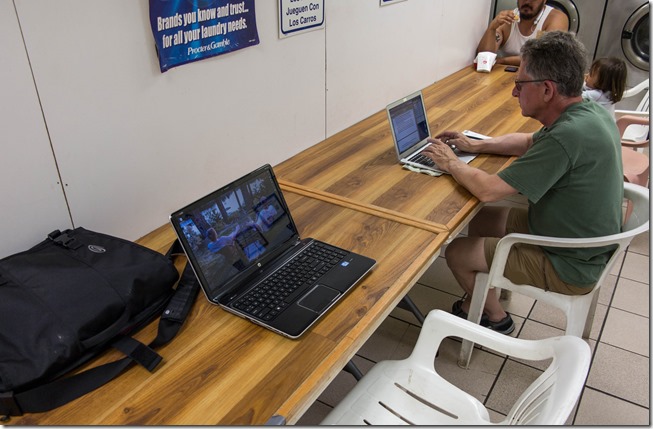 The place was busy. Ed and I were not the endpoints on the spectrum of age or race, and we weren’t the only ones working on laptops while our clothes went round and round. People nodded friendly hellos as we passed and then went back to what they were doing. At the folding tables, they worked side-by-side with elevator politeness, offering a quick apology when elbows inadvertently met. Two women were folding sheets in the aisle; they may have been friends, or maybe just helpful neighbors. Everyone ignored the boisterous kids who raced around the room, carefully avoiding wire wheelie bins full of clothes awaiting a dryer or folding.

When I think of my time in Williams now, what stands out is the Laundromat. Don’t get me wrong, I enjoyed my time in the shadows of Main Street, but the truest reflection of the town and its people were most clearly seen—and appreciated—as we waited for a washer to rinse away the week just ended.