In the 1970s, I made my inaugural exploration of California Highway 1, also known as the Pacific Coast Highway or, concisely, the PCH. On a series of trips I extended it through Oregon and Washington to Seattle, a route we are repeating, with diversions to sights we have not yet seen, such as Crater Lake. Other diversions, such as todays, were unplanned.

Paul Theroux wrote that “Nothing is more suitable to a significant departure than bad weather.” And nothing adds uncertain intrigue to a voyage on two wheels quicker than when one of those wheels goes flat. Our ride north from Santa Monica has been uneventful but rewarding. My riding partner, Ed, traveled this route in the 1980s, and as we search our respective memories for roads previously traveled, our common denominator is the notion that it was easier to find our way back in the day.

Passing through the cities is to be tolerated, the gauntlet we must run to reach the dotted lines on the map that indicated the scenic routes. You remember maps, those magical broadsheets covered with lines that show the big picture of where you are and where you want to go, don’t you?

It used to be that they were available free at rest stops and visitor information centers. When I asked the attendant on one such center, asked in return, “Don’t you have GPS?” Yes, we do, but it is secondary to a map. He said maybe the visitor center on the Interstate, four hours east of our current location on the coast might have one. We found a bookstore that was closer. Barnes & Noble charges $6 for Rand McNally’s Easy to Read! California. 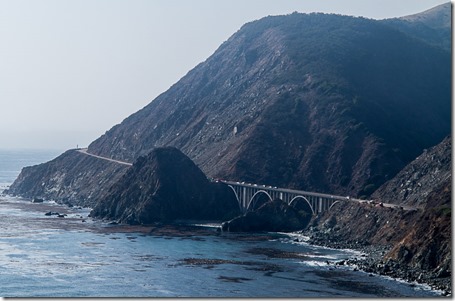 As we rode I searched my memory for images seen four decades ago. Traversing the Lompoc lobe of the California coast I had found nothing of the agricultural factory this region has become. But I will forever more remember the laser-graded fields ready for planting, the plastic covered rows that are a sign of drip irrigation, and the smell of strawberries as we passed vast fields of them. The memories stared to creep from the shadows as we twisted and turned our way into the Big Sur region. It was scenes filmed here, long shots of a motorcycle traversing the area’s iconic bridges, for the 1960s TV show, Then Came Bronson, that ignited my desire to travel by two wheels. 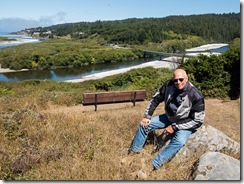 More vexing is the unanswered question of how I missed these unavoidable geographic details that surely existed on my first passage? The same goes for all the small costal towns north of the Golden Gate. (And how did I forget that there is no toll when leaving San Francisco; you have to pay to get in from the north.) And I don’t remember the well-signed “Costal Access” roads and “Vista Points.” This one is above Gualala, California.

It was a stop in one of these towns where my rear tire, a Michelin Pilot Road 4, brand new for this trip, with only 3,500 miles on it so far, picked up a small sliver of metal, probably in one of their graveled parking lots. After a good day of twists and turns, an on the recommendation of Queenie and Cassandra, of Queenie’s Roadhouse Café in Elk, California, we checked into the Pine Beach Motel, an independent hostel  just south of Fort Bragg. After checking in, Ed noticed that my rear tire seemed low. The tire gauge read 8 psi. Just to make the adventure interesting, there’s no cell service and the Wi-Fi works best in the motel’s office. The innkeeper was immediately helpful and connected me with a local motorcycle shop, which didn’t have a tire, but they could put a tube in the flat one, which will get me to the nearest BMW dealer, in Chico (5 hours away) for back in Santa Rosa (4 hours south), depending on who has the tire and can accommodate my needs. Tomorrow should be interesting.