Weathering the Storm, Literally and Metaphorically 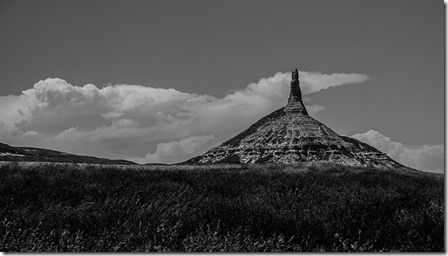 GERING, NEBRASKA—While forking a ham and cheese omelet with hash browns into my face for dinner tonight, the grating National Weather Service klaxon that announces severe weather echoed in the kitchen of Sheryl’s Log Cabin. I couldn’t hear what the warning was about, but the ladies out front were making fun of the weather geek in the kitchen. Given the weather that’s plagued Nebraska for the past several weeks—and the expiring thunderstorms I’d seem behind Chimney Rock—she had every right to be concerned. Walking across the street to my room at the Monument Inn & Suites, the sky over the Scotts Bluff National Monument was a burgeoning mass of gray and darker gray clouds. Calling up NexRad on the Weather Underground, the bigger storm seems to be going north, but there’s a smaller cell with a red heart to the southwest, and it’s headed our way. If Mother Nature has any feelings for me, the storm will blow through, without causing any damage, while I sleep.

When I left Grand Island this morning a similar looking western sky awaited me. Certain I would be getting wet, I packed my rain suit for easy retrieval. Fortunately, I didn’t need it. The storm stayed south, and my route on US 30 and US 26 kept me to the north. I wasn’t so lucky when I rolled into Kansas City the day before. Mother Nature timed the arrival on the only small rain curtain ahead of me to arrive just before I turned off US 152 for the short run to my friend’s house. I accepted the unlucky consequences of bad timing, thankful that I hadn’t spent any more time at the National Frontier Trails Museum in Independence. It was there that I weathered my metaphysical storm.

After a good run along the Great River Road south of Nauvoo, and a satisfying visit at Missouri Military Academy in Mexico, Missouri, where I spent seven formative years of my creative career, the reality of my vagabondage adventure was starting to approach the months I spend daydreaming about it. Like an unstable atmosphere that leads to storms, my positive day turned gray at the museum because it didn’t equal my expectations because it didn’t teach me anything new about the Santa Fe and Oregon Trails. But it was a worthwhile visit because of the epiphany that came from it.

At the museum’s literature rack I was collecting a set of five thick illustrated guides for the road-route that follows the Oregon Trail. As I reached for the fourth I suddenly wondered what I was doing. What kind of adventure would I have with my eyes glued to these guides? It would be little different that people who visit amazing places and see nothing but their smart phones, and behold new sights not as first-person panoramas but as pixels on an liquid crystal index card. I returned the guides to the rack and reaffirmed my dedication to the vagabond’s creed of heading in a general direction and turning off to explore anything that looked interesting. 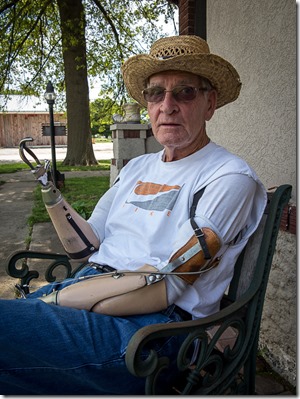 That paid off with Powerball proportions just several hours after leaving Kansas City. Parking on the main street of Burlington Junction, Missouri, I wandered the town were my grandfather lived as a boy, the son of a homesteader who died there in 1903, when a tornado flattened the Masonic Lodge in which he and six others had taken shelter. Turning back toward Main Street I saw an older gentleman sitting on a bench outside his home and said hello. He responded with a question, “Would you put my socks on for me?”

In 2001, Lloyd Pitts lost both his arms below the elbow when the career lineman accidentally became part of a circuit that carried 77,000 volts. Stabbing the air with one of his prosthetic hoods for emphasis, he said, “I should be dead, so all things considered I’m lucky.” After explaining that his wife was out for a walk, and that he had to go cut the neighbor’s grass, he offered me a dollar for my assistance. Instead I asked for a photo and some time to sit and talk.

Born on a farm outside of town in 1940, Lloyd had lived here all his life. Asking if I was related to some Spanglers in the area, I explained about my great grandfather’s tornadic passing, and I asked if he knew were the Masonic Lodge might have stood. Like the lady I talked to in city hall, he didn’t have a clue, and he was unaware of the tornado that swept through the town that is now home to 537 people. I didn’t meet all of them, but those I talked to were consistently friendly. In parting he recommended the Kiss My Grits Café for lunch, and he didn’t steer me wrong. No one there knew anything about the tornado or Masonic Lodge either. Heading west out of town I decided that if great grandpa hadn’t met his untimely end, I might have grown up in Burlington Junction as well, and I would have been happy with that.

To reach Palmyra, Nebraska, where my grandfather Spangler was born in a homesteader’s sod house in 1899, I passed through Nebraska City. On the main drag, next to city hall, was an Eli Wind Mill. Across the street was the Kregel Windmill Factory Museum. It stopped making windmills in 1941 because World War II consumed the metal it needed, but it survived until 1991 doing repairs and making spare parts. All of the equipment, much of it from the late 1800 and early 1900s still works,  “but OSHA knows about it, so we don’t do any work here,” said Dean, the museum’s jack of all trades, pointing to the buffalo-hide belts that drive all of the machinery. My one-on-one visit with him lasted more than two hours, an unprecedented value for the $5 admission fee.

If I followed my daydreamed route, the Homestead National Monument in Beatrice, pronounced, I learned be-AH-trice, Nebraska. But it was late, so it would closed when I got there. For some time I debated on going the following morning and making up the time with longer riding days, and the knotted muscle in my back started burning hotter. And I remembered my vagabond promise at Independence, so I freed myself from the months of daydream preparations and expectations and ultimately forgot about the 400-mile dogleg to the south and pointed Ole Blue’s front wheel west.

The GPS suggested Interstate 80, and I didn’t argue. It was actually a fitting choice because I traveled the pavement in the opposite direction on my first cross-country bike trip 40 years ago, and I spent one night in August 1974 just outside of Grand Island. This time, however, it wasn’t raining. And it’s not raining here, at least not yet. And tomorrow is another day of heading west with my head up and eyes open.