Making All the Right Turns, Counter to the Traffic’s Flow

HAVRE, MONTANA—Thunderstorms awakened me in Kalispell around 0245 this morning, and when I reawakened at 0730, I was afraid to look beyond the curtain. Partly cloudy and sunshine. With no free breakfast or coffee at the Blue & White, I was on the road without it by 0800. I was not alone. The heard was grumbling east toward the cloud shrouded mountains and Glacier National Park.

Riding carefully on wet roads, I debated whether to ride through Glacier, returning to US 2 on the loop that included the Going to the Sun road. The foreboding clouds and wet roads were two strikes against it. When all of the traffic before and after me turned left into the park, that was strike three. I had the road to myself. I’ll catch Glacier and the Sun Road later, when the weather is better.

Ready for a butt break, I stopped at Marias Pass. Noted by Meriwether Lewis in 1805 and surveyed by the Great Northern Railroad’s John F. Stevens (in bronze statue form), at 5,216 feet it is the lowest way across the Continental Divide in Montana. The Blackfeet called it the Backbone pass. It was a peaceful visit, except for the land yacht that was running its APU at 100 percent. To mark my visit, I visited the outhouse and wondered which way my effluent would flow, east or west.

As usual, heading east from the Continental Divide, Mother Nature welcomed me with sunnier skies and warming temperatures. With growing hunger, I slowed as I passed the whistle-stop towns about every 10 miles along the Great Northern tracks on which the Empire Builder Runs. I raced the eastbound train out of Shelby, but a grain truck heavy with just harvested wheat let it get away.

No one turned off to the small towns with low three digit populations, not even me…until I saw the sign for Rudyard, “596 Nice People—1 Old Sore Head!” It also had a depot museum. Rolling into town, past the grain elevator and across the train tracks, I saw the Dancing Beagle Café & Bakery. Even at 1300, it was busy with a lunch crowd where everyone clearly knew each other. A farmer walked in and one eating lunch asked if he was done harvesting. “Don’t know,” said the newcomer, explaining that he hadn’t been able to inspect his fields after the early morning hail storm because they were still too wet.

Munching on a delicious and healthy veggie wrap, a trim, fit, dark haired bundle of energy with in a magenta scoop-neck top and jeans, with a pronounced North Carolina accent pin-balled from table to kitchen to counter to the front sidewalk, where she took delivery of her new commercial toaster. Two farmers stopped eating and went outside to help unload and a young boy pulled the four-wheel hand truck inside. “No more waiting for toast!” cried Lynaille. 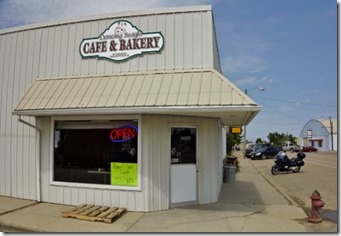 Indeed a North Carolina native, she surrendered a corporate job and moved to Montana with her husband, a Rudyard native, about decade ago. Her in-laws used to run the café, but it had been shut for awhile, she said, and they had been after her to reopen it. After years she relented and the Dancing Beagle opened last week. “I like to cook, and I like to talk,” she explained, so why not?

Seeing me eyeing the display of saucer-sized cookies, which she makes daily, Lynaille said, “You ate a healthy lunch, so you deserve a cookie!” I had a peanut butter chocolate chip, with chunks of Reece’s Peanut Butter Cups standing in as the chips. A waitress said that day’s cinnamon rolls were gone in less than a half hour. In the window was a sign for a Harvest Sack, which turned out to be a hearty lunch, including one of the big cookies. “Call in your order and I’ll have it ready in the  morning!”

Unaccustomed to strangers, the locals started making me a friend with questions. With my helmet on the table, they started with a simple question: “East or west?” One gentleman, seeing Blue waiting outside, came in expressly to talk about BMWs. A toddler came over to say hi! In less than 15 minutes, I felt a home and part of the community. And the food, oh, the food, and the cookie! If you’re within 200 miles, make a visit. You won’t regret it. 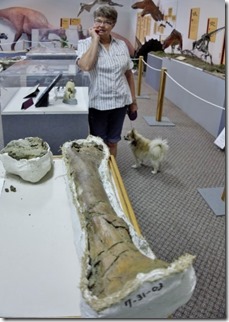 Unable to imagine how the day could get any better, I walked down to 4th St and turned left for the Depot Museum, with its dinosaur annex. There I met Willie, which is short for something. “but I’ve always been a bit of a tomboy, and it’s fit” said the lively woman with the little dog who proudly said she was 67 years old, had been in the area for 25 years, and that her farm had just celebrated its centennial under the stewardship of her husband’s family.

Noted paleontologist Jack Horner has been working the dig on “Leila’s place not far from here,” said Willie, and he’s involved with the annual youth dig that attracts dinosaur diggers from around the world. One of their finds this summer is on display. Willie went into exquisite detail about the process of digging out the bones with dental tools and how they must be preserved and plaster protected because if they aren’t they soon turn to fragments, and then dust. 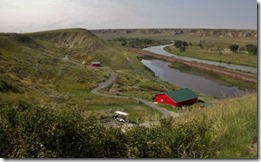 My head stuffed with new knowledge and story ideas, Willie gave me a parting pearl, the correct pronunciation for the city in whose Super 8 I am now typing. Being Green Bay Packer trained, I pronounced it Farve with an H…Harve. Nope, said Willie, it’s “Haver.” After learning where I was staying, she said in parting, “If you get there soon enough, there’s the buffalo jump across the street, behind the mall.”

And so it was. But I was too late for the $9 tour. But I wouldn’t have wasted the money, not after the afternoon with Willie, which cost me nothing the the two hours I eagerly invested with her. Oh, and the one sore head, the town, now down to about 250 residents, elects an honorary sorehead whether the person deserves the title or not. The current sorehead is 93, she said, “and he doesn’t get out a lot.”