Seattle Separation: Getting Ready for the Solo Ride Home 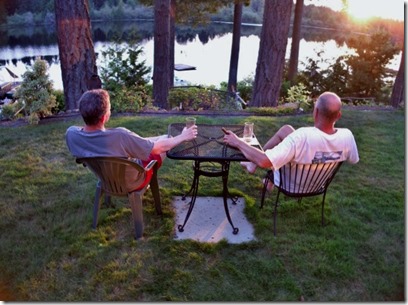 RENTON, WASHINGTON—From my driveway in Omro, Wisconsin, it is 2,883 miles to Ed’s backyard in the Seattle metroplex city of Renton, Washington. We arrived the afternoon of Friday, August 9 at 1541. Reflecting later on our eight day adventure, Ed noted that for “being joined at the hip, we didn’t spend that much time together.”

Giving this a few seconds of thought, Ed was succinctly accurate. In round numbers, we spend a third of the day on the road, with Ed as lead. I was the wingman, usually in Ed’s five o’clock position. If our bikes could fly, we’d be NORDO, for no radio. As necessary, Ed communicated his intentions with turn and hand signals. Otherwise we lived in the scenic solitary confinement of our respective helmets.

Only a wild hair odyssey would have three parts. Ed’s two-thirds, his solo ride east and our ride west, are complete.  I’ll begin my second third, also a solo ride east, to complete the adventure in the next day or so. Before we began the middle third in Omro, my unspoken concern was traveling with another rider for several days, and the voices in my head played out all sorts of potential points of friction.

The pros outweighed the cons by a factor of 10, if not more. The last day’s ride, from Lewiston, Idaho, is filled with a week’s worth of examples. After a long, hot ride we found the Guest House Lewiston. On a walk I scoped out the dinner options. There was an family restaurant next door and a clearly fancier steakhouse down the street, whose façade suggested attire not found in our saddle bags.

Given my performance on solo trips, I would have gone next door where, I’m sure, I would have enjoyed a perfectly fine dinner. Ed, true to his nature, went in to ask the motel clerk for a recommendation. He returned minutes later with two $5 off coupons to Macullen’s Steak, Seafood, and Spirit House, where we savored what was my best meal of the trip.

For lunch on his final day’s ride home, we stopped at Bob’s Burgers & Brews in Yakama, where he’d eaten before. It was somewhat out of the way, and not seeing any signs for it on the way in, I would have never found it. Sticking to our two-lane agreement, he surprised me with the route through Mount Rainier National Park. As planned, we stopped at a turnout that provided a good photo viewpoint. That’s it, above.

Being my inaugural visit to the park, I had no idea where we were relative to the tallest mountain in the contiguous United States.  Expecting to twist and turn our way through the mountains, about a hundred yards we leaned into a right-hand sweeping turn, and there it was, snowcapped and wearing several small clouds. In  a single motion I downshifted and thumbed the right turn signal and coasted into the parking area. (Ed just said this wasn’t planned. “I knew it was coming up,” but not that quickly.)

There no real cons. If I were solo I might, maybe, have stopped for a few more photos. Cruising east on US 12 we crested a hill with a gorgeously lighted panorama of the two-lane bisecting a vast eastern Washington wheat fields and leading into the dark gray could backdrop. For a second I thought about signaling and pulling off for photo, as I’d done a few times before.

But I didn’t stop. We’d just left Clarkston, Idaho, it was my concession to our continued progress. I’m sure Ed wouldn’t have minded, because it would not have been my first photo stop. If Ed sees my headlight flash and signal he’ll pull off with me. If not, when he see’s that I’m not in my usual position he slows down for awhile, and if I don’t reappear, he’ll pull off and wait for a bit, and then turn back is I don’t show in a few minutes.

Reflecting on the middle third of our adventure, the melding of our separate two-wheel travel styles improved each of them separately. When I stopped for photos, he captured his own images, which he included in the Notes from Camp e-mail to his coworker. There are only two east-bound photos on his iPhone.

I got the better end of the deal. Rarely will I return to my usual 600-mile days, which  leaves no time for seeing the sights and talking to interesting people. Ed set the example there, too, striking up conversations with bikers in the parking lot, asking servers about their ink, and seeking dining recommendations from motel desk clerks.

Without Ed to set the example on my ride home, my self-imposed mandate is to make these examples part of my own travel habits on my solo trip home. But I’ll miss having dinner with him, where we’d debrief the day’s ride by asking, “Didja see” the cool old cars in the small town front yard waiting for some passerby to buy and restore them, or the two cows duking it out, head to head, in a dusty corral.

This conversation was really the only time we spend together. Yes, we shared a room every night, but we followed our own preferred dismounted routines. And when we weren’t at dinner, he was pounding away at his keyboard, and I was at mine. That will remain the same on the way home.

3 Responses to Seattle Separation: Getting Ready for the Solo Ride Home