Sturgis: Coloring Outside the Lines

GILLETTE, WYOMING—Traveling through the hemisphere that surrounds Sturgis on the eve of the 73rd annual Bike Rally was such a disruptive emotional experience that I needed to let it ferment for a day before making sense of it and putting the chaos into perspective. Somewhere past the intersection of WY 24 and US 14 I decided that it was a beneficial stop, an event akin to sticking your finger in an electrical socket. The first time taught you everything you need to know, so there’s no need to do it again. 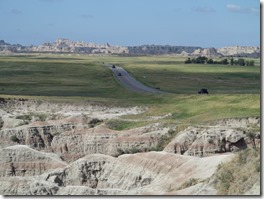 Before we got on the road today, I was with the Ohio grandfather who shared a breakfast table at the Kadoka motel. He was on a road trip with his son and two grandsons, who were close cropped and in their early teens, wanted to see Mount Rushmore. He didn’t know that the Bike Rally was unofficially underway. “We left the women at home,” he said, and if he’d known that their trip coincided with the Bike Rally, he would have stayed home as well.

Our plan was to ride a roughly 300-mile loop that encompassed the Badlands, Mount Rushmore, the Crazy Horse Memorial, and a swing through Sturgis proper. Like me, Ed’s only Bike Rally experience came through TV shows, which focus on the downtown. We thought that the rally was contained to the city limits. Yes, it would be crowded, but “how bad could it be.”

Words can barely describe it. Everywhere we went the roads were filled with packs of bikers accompanied by a visceral unmuffled Harley soundtrack. Add the typical Sunday tourists in their minivans and RVs and towed travel trailers, and any biker used to tracking all the rolling targets that might do him insurance deductible damage has little time to enjoy the sights.

The Badland road was so congested that we dribbled out the south gate, bypassing the loop through the park, and turned toward Mount Rushmore. When the presidents came into view, we pulled off for a photo, joining the several hundred other bikers who’d done the same thing. We moved on before the Park Police worked their way up the line, moving the bikers on their way. The line of bikes, minivans, and RVs waiting to enter the park proper was maybe a mile or more long.

There was no line at the Crazy Horse Memorial, but it had four or five guys trading an entrance ticket for $5. The two level parking lot, which covered at least six acres, was carpeted with bikes, most of them members of the Milwaukee V-twin symphony. We did a quick tour, watched the orientation film, and returned to the road. With all the noise, the traffic, and the anxiety that grew from it. the day was becoming one of traveler interruptus.

We passed through some interesting small towns, Lead and Deadwood, that begged our exploration. But their streets were filled with bikes parked air filter to muffler with barely enough room for a rider’s leg between them. Pavement not filled with bikes were covered with the 10-foot-square sales tents. T-shirts and turkey legs were for sale everywhere. The best commercial offering we saw was the bike wash held by some remarkably trim, fit, and good looking young women in bikinis. One of them held a sign that read: “We like them dirty.”

The nubile lovelies were doing a good business with the gray-haired Harley riders, at least the ones unaccompanied by a human with two X chromosomes and sun-leathered shoulders. At the other end of the spectrum was the 20-to-40-something male wearing a do-rag instead of a helmet. And they were everywhere, and I suddenly realized that during rally, “Sturgis” is uncontainable in the city limits.

During the rally Sturgis extends in all directions for more than 80 miles. On the ride today we passed through the small town of Hulett, Wyoming, population 383. WY 24 made two turns through town, and both sides were lined with parked motorcycles. The clustered sales tents offered t-shirts and turkey legs. We didn’t stop at any of them because the hordes who did get off opened up the road again, and we weren’t going to waste that opportunity.

I’ve never ridden in groups before, and following Ed, who’s GPS equipped and thereby the leader, is the first time I’ve ridden as a flight of two in maybe 40 years. In and around Sturgis, similar small groups merge into packs. On our way back from Crazy Horse we were the Tail-end Charlies in a line of 50. That didn’t last long. When I looked in my rearview soon after that, the line of headlights stretched over the hill behind me, winding up and down with pavement like some glowing deep sea worm.

The Sunday night news put it all in perspective. That day, before the rally officially began, the police tallied 45 DUIs, up from last year’s same-day total of 33. There was one fatality. A 60-year Harley rider drifted off the right side of the road. “He wasn’t wearing a helmet,” the newsreader said. A police officer was in the next segment, preaching safety.  Riders, don’t speed and maintain a safe following distance. Drivers. keep an eye out for bikes, and check your blind spots before changing lanes.

One question I could not resolve on today’s ride is why several hundred thousand bikers participate in the rally. Influenced by yesterday’s anxious over stimulation, most of my guesses were rooted in the mentality of a herd trying to compensate for physical and emotional shortcomings. After the calming influence of Jack and Rocky and a good night’s sleep, today I believe their participation is driven my our need to belong to a tribe of individuals that flavors their bland Monday through Friday lives with a healthy dose of two-wheel, unmuffled Tabasco.

Freelance writer, editor, and photographer of myriad aviation topics and the exploration of America's small towns.
View all posts by smspangler →
This entry was posted in Lodging, Motorcycle, Travel and tagged Bike Rally, Motorcycle, South Dakota, Sturgis. Bookmark the permalink.