Gettin’ Out of Town on a Twisty Road

We rolled out of Omro this morning at 0815 and cruised west on WI-21. It’s a familiar route for me. A two-lane bordered by beans and corn that connects the main streets of small towns along the way. Ed’s a good lead, and I was doing pretty well as a follower, until I almost rear-ended him in at the second WI-21 turn in Wautoma. We all had our right turn signals on, including the car in front of Ed who turned, unexpectedly, in the driveway before the continuation of WI-21 while I was checking my six. Fortunately, I neither hid Ed or fell down.

It’s going to be a good trip.

We crossed the Mississippi River at La Cross, and from there I was lost, totally dependent on Ed the the route he’d program into his GPS. I did learn that La Crescent faces La Cross across the river. We stopped at a Kwik Trip in Hokah, Population 580, for a butt rest. With succinct accuracy he described the day: “We nailed a perfect ridging day.” Indeed it was. Warm sun. Clear sky. Cool ambient temperature that wasn’t cold enough for the quilted liner to my riding jacking jacket, but not warm enough to ride with the windshield in its lowest position.

We were, for the most part, the only ones on the road that started to get interesting when we approached the bluffs that watch over both sides of the river. They gently twisted and turned as they climbed and fell with the rolling terrain. The Minnesota fields of corn and beans were perfectly manicured, patiently well groomed by bachelor Norwegian farmers, so it was easy to see that there were no lethal surprises around the next corner. Soon a soothing rhythm of sweeping left and right dominated my senses, replacing my need to watch the arrive and passage of the next milestone, which usually dominates my Interstate travels.

Watched over by Ed’s radar detector, we were cruising between 65 and 70, until it went tango uniform. At the Kwik Trip he bought some Ray O Vac AA batteries, which turned out to be about a millimeter shorter than the Energizers they replaced. We stopped later for some Duracells that were the proper length, and our speed increased, as the twist and turns allowed.

Ed planned our mileage for the day at 292, but his GPS didn’t know about the detour on MN 16, which is the road we mostly followed. Still, it got us to Spring Valley, where we lunched at Elaine’s Café on Main St. Ed asked the waitress—at a café they have waitresses, not servers—is she was Elaine. No, the friendly young woman with highlighted hair said, “I’m her granddaughter Darla (at least I think that is what she said her name was), Elaine is in the kitchen.”

Having trouble deciding on lunch, we asked for Darla’s recommendation. She said the cheese burger she’s had for lunch was excellent, although she said she ate there because the food was good and, for her, free. Ed went with the BLT and ice tea. I ordered the pork tenderloin, hash browns, and a glass of milk. The potatoes were better than the sandwich. But for $7.45, I couldn’t complain. The milk was excellent. And so was the ambiance of the typical, unpretentious small town café.

GPS ultimately led us to the Super 8 here in Fairmont. Regina, the desk clerk couldn’t have been nicer. I got the room because, as an AARP member, I got the better rate, and the bill. As I was dropping my helmet in the room, Regina suddenly appeared at the door, asking if we’d like a room across the hall, so we could park the bikes outside our window. Regina rocks. They obviously get a lot of bikers here because in the alcove are two cardboard boxes, one with rags to wipe down your bike and another with squares of plywood that keep your side stand from sinking into the asphalt parking lot.

As I was sitting here by Blue, the Road Warrior laptop on the concrete parking space dock, writing this, a number of bikers pulled in, including a couple from Thunder Bay, Canada, he on a silver 2004 BMW R1150RT and she on a 900 cc Kawasaki Vulcan V-twin. Like most of the bikers in the lot, they were on their way to Sturgis for the annual motorcycle rally. And like us, he was a pilot, and a flight instructor. We had a nice chat and proved, once again, that aviation is a small world. We had a number of mutual acquaintances, like ultralight legend Roy Beswinger. 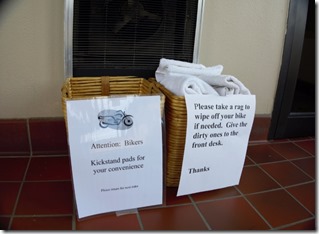 We met the Canadian couple after dinner at the Green Mill Bar & Grill, which is adjacent to the Holiday Inn Express across the street, where we took full advantage of our free drink coupons. Ed mentioned the coupons in jest, and was surprised when Regina started filling them out. It turns out that the same company owns all four motels, the bar & grill, and the Perkins restaurant at this exit on I-90, which parallels the two-lane we took to this destination.

Ed and I will be passing through Sturgis on our way to Mount Rushmore, Crazy Horse, and the Little Big Horn Battlefield. But where we’ll be tomorrow night is, to me, now unknown. Ed’s in the room trying to figure that out. If he can get the Super 8 Wi-Fi to connect. I need to attempt that myself, so I can publish this post before I shower and rest up for the next leg of our adventure.

Freelance writer, editor, and photographer of myriad aviation topics and the exploration of America's small towns.
View all posts by smspangler →
This entry was posted in Motorcycle, Travel and tagged Minnesota, Motorcycle, Sturgis, Travel, Wisconsin. Bookmark the permalink.